Longitudinal melanocyhia is due to activation of melanocytes in the nail matrix. It is more common in darker skinned individuals and may affect one or several nails. The band may occasionally extend across the entire nail (total melanonychia). Transverse melanonychia is rare.

There are various causes of longitudinal melanocychia.

Nails grow slowly – about 1mm a month, taking months to reach the distal edge, and longitudinal melanonychia reflects melanin deposition rather than the site of its production. 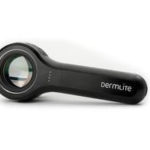 Dermoscopy involves an evaluation of the skin surface. When cutaneous legions are examined with the naked eye, many of the skin features are obscured by reflection, refraction and diffraction of light due to the startum corneum. The ability to visualize these structures improves the diagnostic accuracy in determining which lesions to biopsy.

The specialized fat pad at the bottom of our forefoot, which acts as a shock absorbing cushion, can begin to shrink and shift with age and use. The change in anatomy predisposes individuals to develop problems such as neuromas, metatarsalgia, capsulitis and bursitis – all of which which can make walking and standing painful and laborious. Common symptoms for patients with fat pad atrophy include forefoot pain that gets worse when standing and walking, toes that may feel as if they go numb, loss of tissue volume, and calluses that form over areas of bone prominence.

There are multiple conservative options available to restore the cushion at the forefoot and rejuvenate the lost tissue. Dermal fillers are injectable compounds used to “fill” or plump the areas that have lost volume. Other options may include custom-made orthotic devices used to pad and offload the forefoot. In some instances, surgery may be beneficial.

Dermal fillers have been adapted to reverse the effects of fat atrophy in the feet, providing patients with a virtual ‘foot facelift’. Injectable filler material can be used to cushion corns and calluses secondary to bunion and hammertoe development. They can also be utilized to provide a more youthful appearance to areas of the foot that sink with age.

The injection process is simple and is performed as a 15-20 minute in-office procedure. It is relatively inexpensive and painless. The affected areas are identified and the filler is injected to provide a cushion where volume loss has occurred. An immediate improvement can be observed following the procedure. Recovery is simple and only requires 24-48 hours of rest.