Toenail fungus, also known as onychomycosis, is an embarrassing and sometimes painful condition that affects 10% or more of the population.

We have been successfully using lasers to treat toenail fungus in many of our patients for over five years now. When given a choice between drugs and lasers, most of our patients prefer the safety of laser treatments.

Recently, we upgraded to a new generation of photobiology technology by purchasing a laser that uses light, not heat to treat fungus. The new device is the Noveon NaiLaser.

To date, we have treated hundreds of patients with the Noveon NaiLaser and have seen very convincing results. The majority of patients are seeing clearer, healthier nails within months while using a simpler, safer procedure. Some of our patients who have been less successful with other lasers have found this treatment an effective way to treat nail fungus. 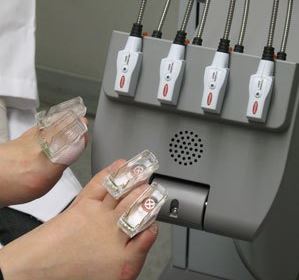 The Noveon NaiLaser is an FDA-approved medical laser based on proprietary, patented technologies. While other nail lasers kill the nail fungus using heat energy, which can be very painful, the Noveon NaiLaser kills fungus using special light energy. This important difference allows toes to remain much cooler with less or no pain in most patients.

Noveon NaiLaser is backed by the most in-depth scientific and clinical data of any nail fungus laser on the market. The manufacturer has published their research five times in leading peer-reviewed medical journals, including the Journal of the American Podiatric Medical Association (JAPMA). No other laser has published even one peer-reviewed study.

Treatment with the Noveon NaiLaser is comfortable and safe. Depending on the severity of your condition, a complete treatment program typically involves 3 treatment sessions lasting 16-35 minutes each.

After your treatment cycle is complete, you should begin to see clear nail grow in behind the existing discolored nail. Depending on how fast your nails grow, it may take six months for healthy nail tissue to fully replace the diseased toenail.

Nail fungus is an adult disease that is especially prevalent in older people and/or people with weaker immune systems.
Since the fungus that causes the disease can be found in many different places, you can catch nail fungus almost anywhere. Some of the most common sources are pedicures at salons without proper hygiene practices, toe and toenail injuries, untreated skin infections, and wearing badly fitted shoes. People with Athlete’s Foot also tend to be susceptible to catching nail fungus, too.

Once contracted, nail fungus is very difficult to get rid of. It won’t go away by itself. Treatment is required.

If left untreated, nail fungus can permanently damage the nail and spread to surrounding nails and skin areas in the form of athlete’s feet or dermatitis.

It is important to note that at Foxhall Podiatry, our first step in treating nail fungus is to confirm that you actually have it. Nail fungus is often misdiagnosed and/or found in conjunction with other conditions that render laser treatment less effective. In several studies it was found that 50% of the time a thick nail is NOT fungus but due to another cause.

One of the common OTHER causes of thick yellow nails is PSORIASIS.

As a result, our first step is to do DNA/PCR sampling of the diseased nail to determine the underlying cause. If you have nail fungus, we can proceed with laser treatments. If you have psoriasis, dermatitis or any bacterial infection in your nailbed, we may need to consider alternative treatment options.